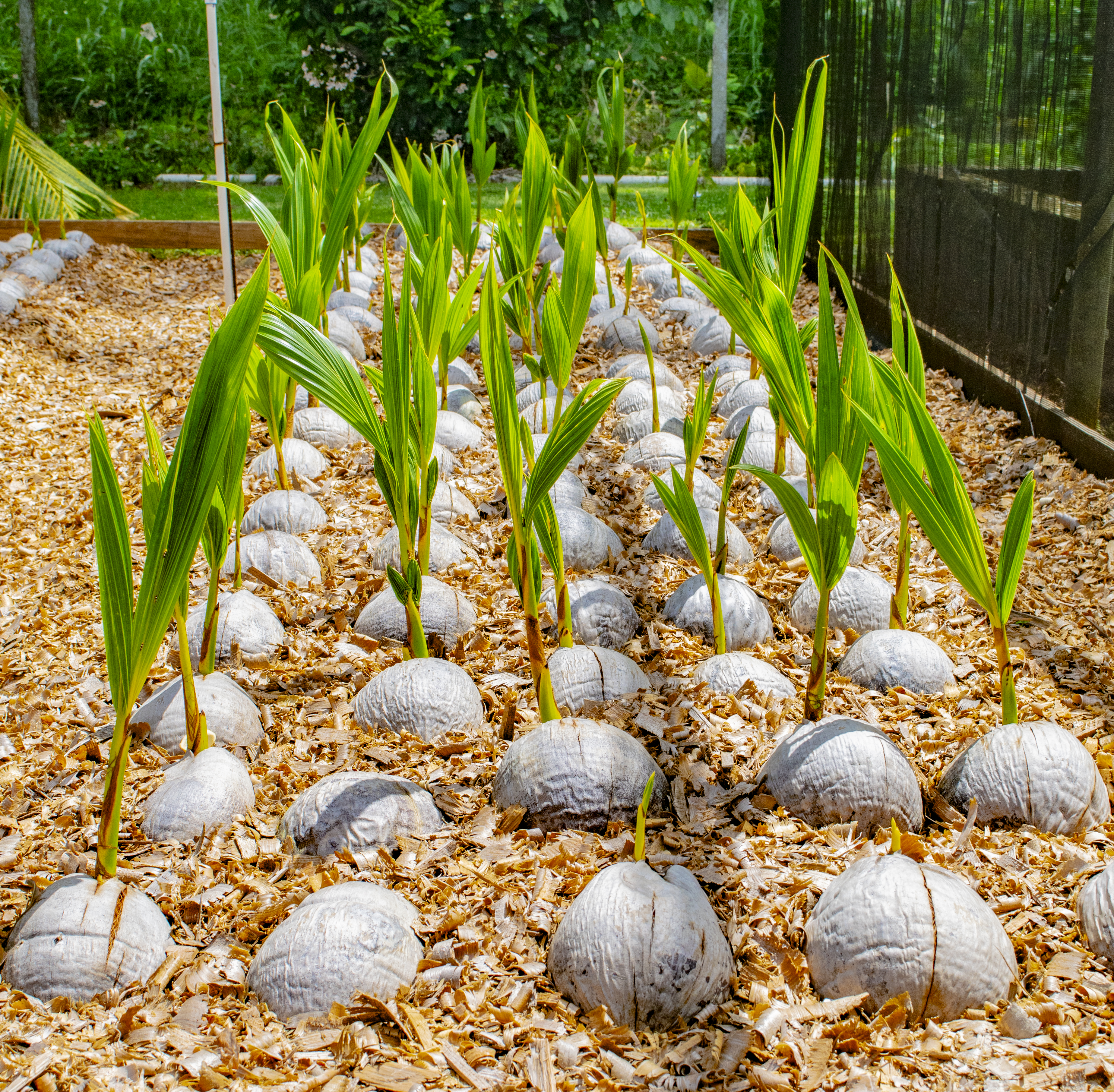 There are 4 types of coconut palms; Tall, Dwarf, compact dwarf and semi-tall and at least 400 varieties.

Stick it in moist soil – half buried – for a month or two and if a shoot doesn’t emerge then it is a sterile seed. The coconut has 3 lobes- the side that has the 2 biggest ones faces the sky. Average temperature needs to be 75 degrees minimum.

All Talls need to be planted in well-drained soil for optimum growth. The soil should be sandy-loamy and alkaline which is the beach/cayes environment. It is always best in the long run to plant palms where they grow naturally otherwise you will spend a lot of time and money trying to make something thrive in an environment that it does not like.

Because the Tall is so well adapted to the ocean side environment, it really needs very little planting attention. The first thing to emerge from the seed nut is the shoot at which time the nut should be buried so that the top 1/3 is exposed above the sand with the shoot pointing skywards.

The tap root will then emerge from the bottom and keep growing downwards until it finds a source of water. While the tap root is going down, fine feeder roots sprout laterally. The nice thing about a coconut is that it has its own built in food and water supply for the first 3-4 months so you do not have to water the seedlings until then. It is best to plant the seedlings in the dry season so that by the time the roots are established and the Internal food source is exhausted, the rainy season has started.

All coconut palms love the sun and heat. Seed nuts will have a higher germination rate in higher temperatures and the seedlings will grow faster also. Everyone loves the picture postcard palms with the curvy trunks and the reason why the palms do that is because they are competing for direct sunlight. A trick to use while planting is to place a seedling in a shaded area where it will have to grow out and away from the shade to get direct sunlight. You can also plant a group of 3 to 6 coconuts in a circle with a 10ft diameter and in 8 years you can have a great place to sling a hammock.

The commercial planting spacing for a Tall is 35ft apart.

The MayPan was originally developed as a commercial solution for the copra business. It produces lots of large nuts at an early stage of development and does not get as tall as fast as the ‘Tall’ variety, which makes it easier to harvest. By coincidence, it was found to be approximately 85% resistant to Lethal Yellowing so that is why this is the most popular hybrid for replanting – not because it grows faster.

The MayPan is half Malaya Dwarf which means that there is a genetic element to the palm that does not like the beach/cayes environment. My personal observations in Belize on Maypans that have been planted in the last 10 years on the cayes, show that in general they do not grow well or in some cases do not grow at all without attention to planting and fertilizing.

When getting started, MayPans need more water and more nutrients than are available naturally in the cayes environment. If you ask 5 agronomists on how to plant and fertilize these palms, you will get 5 different answers, however, they will all agree that the commercial planting spacing for a MayPan is 25ft apart.

Here is how I would plant my MayPan:

I do not recommend planting true Dwarfs on the cayes unless you want to go through the same procedure as with the Maypan. Even then, the palm will suffer from excess salt and winds. It is best to plant these palms in a more protected fertile environment such as on the mainland.

-Do not prune the green fronds on the palm. The mature fronds are at the 9 o’clock and 3 o’clock position which produce the most needed sugars for the plant. Prune the lower fronds once they have gone from green to yellow or brown. Also a pruning wound is the strongest attractant for the palm weevil.

-Do not cut out the green nuts as the palm stores a lot of its food reserves in them. If one is afraid of coconuts falling on one’s head then wear a hardhat.

-Do not mix concrete close to a palm tree or dump chemicals near the root system. Coconut palms are in the grass family and are very sensitive to harsh chemicals.

-Plant coconuts everywhere – they are the symbol of the Caribbean!

How to Make Coconut Butter

Recommendations for the Project