• Chief Technical Director in the Ministry of Agriculture and Fisheries, Dermon Spence, says the local coconut industry remains a potentially lucrative one.

• He says coconut is also used to manufacture alternative sources of energy, “with the husk…being used for fuel in countries such as Indonesia”.

• Mr. Spence contended that the possibilities and opportunities within the coconut industry are “endless”, but can only be realised with increased crop production. 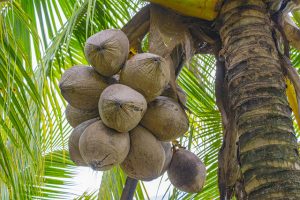 Chief Technical Director in the Ministry of Agriculture and Fisheries, Dermon Spence, says the local coconut industry remains a potentially lucrative one, capable of generating significant export earnings and employment. This he says is despite the challenges the sector has encountered. He notes that based on current global market demand for a range of value-added and by-products, including: coconut shell charcoal, coconut milk powder, coconut cosmetics, coconut palm sugar, coconut flour, and coconut chips. Additionally, he says coconut is also used to manufacture alternative sources of energy, “with the husk…being used for fuel in countries such as Indonesia”, while coconut methyl ester (CME) or coco biodiesel, a derivative of coconut oil, is also produced from the crop. This, he informs, is used to fuel motor vehicles and oil-fired power plants, in several countries. Mr. Spence points out that CME can be used on its own or blended with industrial fuel oil, “making oil-filtered power plants more cost efficient and environmentally friendly, because harmful emissions are substantially eliminated.” He informed that there are also “established and viable markets” for coconut coir fibre and dust, with China, Japan, South Korea, United States, Italy, Mexico, United Kingdom, Canada and Iran, being major importers. Mr. Spence was speaking at the Coconut Industry Board’s (CIB) annual general meeting on Saturday, May 5, at the Jamaica Conference Centre, downtown Kingston, where he represented Portfolio Minister, Hon. Roger Clarke. In his remarks, Mr. Spence contended that the possibilities and opportunities within the coconut industry are “endless”, but can only be realised with increased crop production. He noted that local coconut production totaled 97.4 million nuts in 2013, describing this as “way below market demand”, and underscoring the need for improvement. The Chief Technical Director cited several factors, such as Lethal Yellowing, which he argued “continue to pose a problem for the survival and sustainability of the industry.” “It is well documented that the industry, for some time, has been one that is ailing. This…is as a result if setbacks occasioned by the impact of the disease on the industry, and the problem of praedial larceny,” he stated. In light of this, Mr. Spence commended the CIB for implementing initiatives to assist in fighting the disease. These, he outlined, include analyzing different varieties of the coconut palm for resistance to disease; conducting surveillance and eradication measures; continuing research to develop highly resistant planting material; and exploring “effective means” of controlling and managing Lethal Yellowing. He stated that, “these initiatives must be lauded because, with limited resources, you have accomplished so much on your own, and with the help of international donor agencies”. 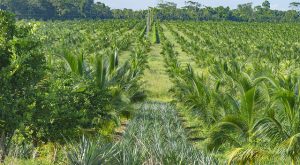 Mr. Spence said that while there is need for a more reliable and faster method of replacing trees, the Board’s efforts to increase the production of coconut through its planting programmes, must be commended. Through this programme, some100,000 seedlings are provided to registered farmers annually,” he said, adding that “farmers also receive fertilizer for 80 per cent of (the) seedlings granted, a weed grant, and technical assistance.” Mr. Spence noted that despite the challenges, the CIB continues to promote the industry by purchasing coconuts from farmers for its Coconut Shop. He advised that approximately 915,000 coconuts were purchased at a cost of $36 million, for use in baked products and confectionaries. He also emphasised the opportunities to be gained from cultivating coconut orchards and engaging in value-added activities. He argued that establishing factories to produce oil and milk powder, among other products, will not only provide many job opportunities, but will require “great amounts” of coconut. “I, therefore, urge you to put plans in place to establish such facilities. I (also) encourage you to produce more coconuts. With increased production, we could realize, not just increased job opportunities, but also greater foreign exchange earnings, and improved lifestyles. Opportunities do abound in the global marketplace for coconuts and coconut products. We need to grasp those opportunities,” Mr. Spence stated. He added that the Government is committed to ensuring that advancements are made “as we pursue the development of a modern, efficient, and internationally competitive sector that contributes to the development and well-being of our people.”

Keeping the information flowing through COVID