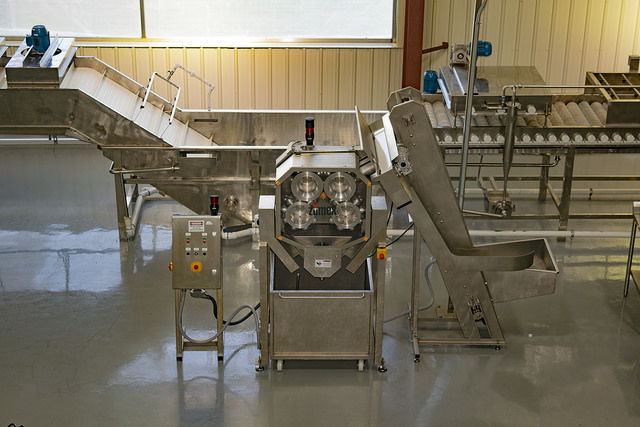 Coconut Production: The Wider Caribbean produced an average of 512 thousand tonnes of
coconut annually over the 1999/02 period of which CARICOM accounted for 301 thousand
tonnes or 59% (Table 3.2). Among the non-CARICOM countries the Dominican Republic was
the major producing accounting for 166 thousand tonnes.

Regional Coconut Oil Production: Historically, most of the Region’s Coconut was converted
into Copra for the production of Coconut Oil and the residues were used for animal feed. In
recent years a number of factors have contributed to the decline in the percentage of Coconut
being converted into copra and Oil. On the demand side these factors include the increasing
competition faced by Coconut Oil from soybean and other vegetable Oils. Supply side factors
include the growing demand for bottled Coconut Water, the impact of disease on production and
the conversion of Coconut Estates to built development.

Only Trinidad & Tobago and Guyana have commercial scale operations to produce Coconut Oil –
the former with one plant and the latter two. According to FAOSTAT, the estimated total
CARICOM production of Coconut Oil in 2002 was 23,000 mt with most of the production
being concentrated in Trinidad & Tobago and Guyana. According to the FAO data, Trinidad
& Tobago produced approximately 7000 mt, Guyana 2,000 mt and Jamaica 5,000 mt. St Lucia, St
Vincent, Suriname and Belize each produced an estimated 1000 mt, all through cottage scale
operations. The FAO regional estimate of Coconut Oil production are likely underestimates since a significant volume of Coconut Oil is produced at the household or Cottage Scale level
throughout the Region.

Trade in Copra / Coconut Oil: Total intra-regional trade in Coconut Oil in 2003, refined or Oil
equivalent from copra, was 838 mt valued at USD 0.6 mn (Table 3.3). Within CARICOM, the
major importers of copra or Coconut Oil from Regional sources were Jamaica, Grenada, Trinidad
& Tobago and Suriname. In the case of Trinidad and Tobago, the country imports both Coconut
Oil and copra from Guyana, valued at USD 0.2 mn in 2003 (Table 4.2). Regionally, Jamaica was
the largest importer of Coconut Oil, amounting to 227 mt in 2003 at a value of USD 0.3 mn. All
supplies to the Jamaican market in 2003 came from Trinidad & Tobago. Smaller volume of trade
takes place between Guyana and Suriname, Trinidad & Tobago and Barbados as well as Antigua
and between St Lucia and Barbados.

Guyana, Jamaica, Trinidad & Tobago, Belize and St Lucia consume most of the Coconuts and /
or Coconut oil produced domestically. In the case of Jamaica small quantities of coconut oil,
produced using the ‘cold press method’ under cottage-scale processing are exported to the USA.